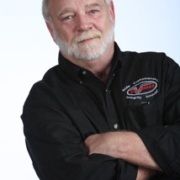 Thomas “Tom” Johnson (1951-2015) had the distinction of being the longest serving employee of Vos Glass, Inc. While in high school, Tom began his career in the glass industry. He was hired to work at Varano Glass by Jake Vos, who at that time was a Contract Manager of the former Varano Glass. Tom was one of the first employees Jake and his wife Barb hired when they started Vos Glass, Inc. in 1982.

Tom was well known and respected in the glass industry for his hard work and integrity. Over the years he had many roles, including Director of Contract Glazing. His varied experience in glass and glazing was invaluable to any type of project. Tom retired as a Team Coordinator with a wide scope of responsibilities. His father, Bill Johnson, also retired from Vos Glass, Inc. We are proud of all the Johnson family members who have been our employees.

Loyal and a free spirit, Tom often took the open road in his spare time as an avid motorcyclist and traveler. As a “moving” tribute to his legacy, a Vos Glass truck proudly held a prominent position in his funeral procession. We will remember Tom for his many contributions over three decades.

If you are interested in making a donation in Tom’s memory his family requests that you donate to Mel Trotter Ministries.